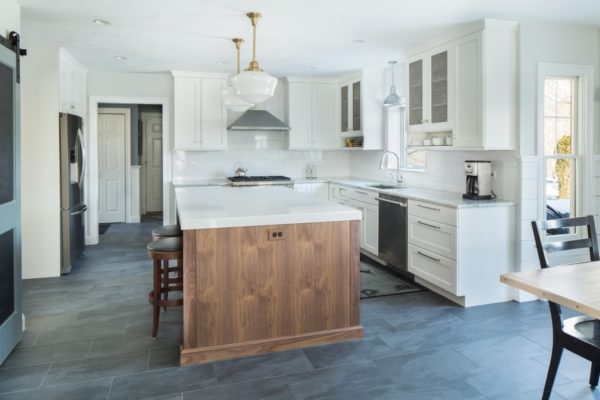 you are a homeowner and just had the kitchen of your dreams installed and are so happy to begin using your new space, you plug back in your appliances, coffee maker, lamps etc. and settle in.  One day seemingly out of the blue, your electrical breaker trips, you find the breaker and turn it back on because you’re a pretty handy homeowner and “YOU GOT THIS”, then it happens again and again until  you decide it’s time to call a Pro.

If this scenario sounds all too familiar and you have a problem with persistently tripping breakers you are not alone, this is a common issue that we get calls about frequently. The main objective in calling a pro is to get to the bottom of the issue since it’s not always as easily identifiable for most homeowners. Unfortunately, getting to the bottom of the issue is  perhaps even more difficult (even for the Pros) since the updating of certain electrical codes.

The various code councils are always assessing and updating code standards to safeguard the health, safety, and general welfare of building occupants. Many of these code upgrades have to do with shock & fire prevention in an around the electrical wiring in your home.

Some of the more recent electrical code updates stipulate that specific types of electrical breakers be used in certain areas of the home to help prevent fires. Any measure to prevent fires and increase safety in a home is definitely a positive change, however some negative ramifications have come from some of these changes as well.

These newly required breaker types are called AFCI (arc fault circuit interrupter) or CAFI (combination arc fault interrupter) and are designed to sense arcs, many of which are normal in the operation of switches, motors and other electrical appliances. The breaker is supposed to turn the circuit off when it detects a dangerous arc caused by a frayed cord, or a loose connection or any other problematic item that could start a fire. Very good thing right? Well,  yes of course,  but the nature of these newer devices is that they are designed to be pretty sensitive at times leading to what is called “nuisance tripping” or tripping of a circuit for no apparent or identifiable reason. Of course there is always a reason, but identifying a valid safety concern and addressing the reason can be where issues arise.

At times, older products with motors will cause the AFCI breaker to trip. This is because the brushes wear down on these older motors, which causes the arc pattern to become irregular and not as rhythmic as when the motor was new. This causes AFCI to detect this as an arc and trip the circuit for safety.

Do note that AFCI breakers differ from GFCI breakers that are designed to trip when the load becomes unbalanced between the hot and neutral wires, also known as an electrical “leak”. GFCI breakers are to protect people from getting shocked versus AFCI which are to prevent electrical fires. Both AFCI and GFCI breakers perform the duties of a standard circuit breaker which is to protect the wiring from short circuits and overload conditions.

Note that combination AFCI and GFCI breakers are also used and do all of the functions described above. These breakers are commonly used on dishwashers, disposals, kitchen circuits and other kitchen appliances near the sink.

Ok,  enough talk about the technicalities right? Let’s get back to the issue at hand, identifying the cause and knowing when to call in the professionals.

Step 1
Identify the Circuit causing the issue.
 At the breaker panel identify the circuit that has tripped. The switch will be in the neutral position (between on and off).
 If the circuit is an AFCI breaker it will be labeled as such and will have a “test” button and sometimes light indicators. Below is an example of what AFCI breakers look like: 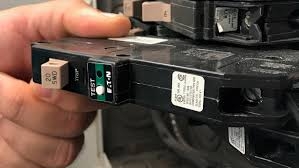 Step 2
Isolate the potential cause.
 Unplug all fixtures/appliances plugged in to the circuit.
 Turn the circuit switch back into the “on” position
 Plug in each appliance or fixture back into an outlet on this circuit one at a time and turn on or run each for a time to see if any of them are causing the trip to occur.

Most common items that trigger AFCI Tripping:
1. Vacuums, , typically being plugged in or unplugged when turned on
2. Any older motorized appliance or tool
3. Fluorescent lights
4. Surge protectors/power strips
5. Older appliances or fixtures
6. Any appliance or fixture with a worn plug or wiring (sometimes caused when furniture is pushed against plugs)
7. HAM Radios
8. Loose light bulbs, worn receptacles, plugs not fully plugged into the receptacle.

Step 3
If any of the devices trigger a trip, unplug the item and test it on another circuit that is also AFCI protected. If this same device trips a different AFCI circuit breaker, it’s the result of incompatibility between the electronic device and the AFCI breaker, or possibly a major problem with the device. You can try relocating the device to a non –AFCI protected circuit or if the device is older or plug/wiring is worn you may want to consider replacing the fixture to reduce fire hazard risk & reduce chances of future nuisance tripping.

If the trip is not duplicated in another AFCI circuit, contact your electrician for further investigation.